My mum has never made anything she called ‘pakora’. What she does do however, is coat certain thinly sliced vegetables in a batter made from gram flour, deep fry them and call them ‘bhajya’. As far as I can tell, pakora are the same as bhajya except that pakora are made with a mixture of different vegetables and end up bigger whereas bhajya are made with only one or possibly two types and end up smaller.

I made some potato bhajya based loosely on the pakora recipe in Veena Chopra’s Real Indian Cookery. The potatoes were peeled and sliced thinly before coating in batter and then deep fried. (Note for future: leaving the potato slices in the batter made the batter watery.) They had to be fried slowly so that they cooked through without the outside burning. The bhajya weren’t very spicy but they were made to be dipped into homemade chilli jam so they weren’t supposed to be. They are best eaten straight away; even reheating in the oven did not recapture the original crispiness. 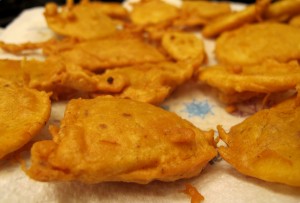