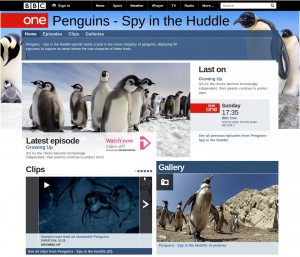 These programmes are fantastic. Cheeky, cute, brave and determined, penguins are fascinating creatures. I now love them.

Apparently the best place in the bungalow to have a nap is on the doormat by the front door: 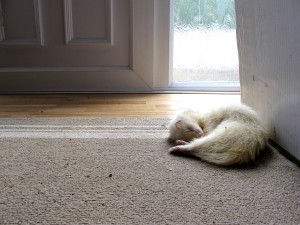 I’ve enjoyed this series so far. I liked this dog in particular: 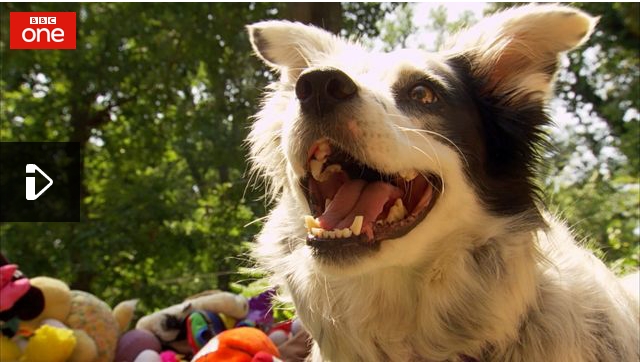 Also in this episode, during the cooperating elephants feature, there was a song that I recognised. It drove me mad trying to remember what it was. Finally something stirred in my brain: it was something to do with an Apple advertisement. Much later I realised it was from the ipad2 video. Bloody Apple, finding yet another way to drive me mad. Anyway, this is the song:

I found this essay about stuff by Paul Graham last year. It struck a chord at the time because we were packing to move from a bigger home to a smaller one. We gave away a lot of stuff but still brought a fair amount of it to the new place. There is now a room full of still packed stuff because it can’t be unpacked until the loft has been insulated and prepared as a storage space. So I have to wonder, if we haven’t touched all that stuff for 13 months, do we really need it? Do I even remember what it all is?

I dislike clutter. Whether PG’s theory about parsing is right or wrong I don’t know but I do know that, in my own home at least, I’m far more relaxed in a clean, tidy room than a dirty, cluttered one. So I’ve gone paper free with as many of my bills as possible and I’ve gone digital as far as possible. I download books to and use the Kindle app to read them on the iphone. I haven’t bought any CDs for quite a while, instead preferring to use Spotify. I realise that you can’t find everything on there but I find about 90% of what I want to listen to and that’s a good enough trade off for me. For films I use Sky Movies. In the rare case that I find a film that I’ll want to watch over and over again I will consider buying the disc but it’s more likely that I’ll just watch it again on Sky.

Christmas and birthdays are the worst times for accumulating things I don’t need. Specifically for these occasions I have a wish list on Amazon but sadly Kindle editions of books aren’t available as gifts yet. (Mind you, I do like ‘real’ books. I don’t class them as useless stuff, after all, they are useful when I need to save the iphone’s battery and, unlike digital editions, I can lend them to people. Anyway some books, such as cookery books, have to have a decent physical form to be of any use.) I don’t mind if people go ‘off list’ to buy me a gift provided that it’s something they’ve thought about. I have one dear friend who likes to introduce me to new books and it’s rather lovely. But on the whole I’d rather not have presents because I have everything I need and want. 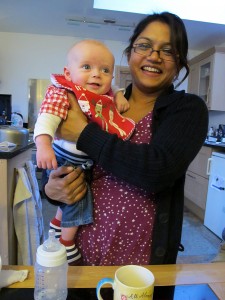 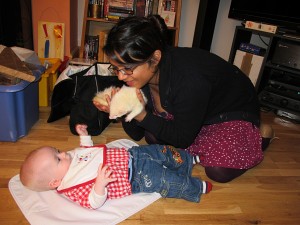 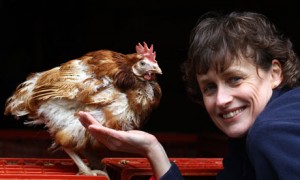 This is a cute story providing publicity for one of my favourite charities – The British Hen Welfare Trust – but I don’t think an extra 200 square centimetres per bird, which is about the area of two beermats, makes much difference. Buying organic, or at least free range, is still the only way forward. A caged hen, even with a bit more space, is always prevented from carrying out her full set of natural behaviours.

Lucy is now six and a half years old. She’s certainly showing the signs of ferret old age, but with the help of regular steroid injections she has quite a good quality of life. 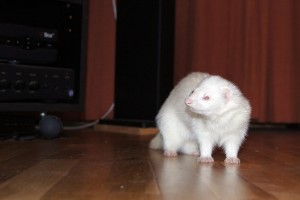 We had to have Same Same put to sleep yesterday morning. He was diagnosed with lymphoma in May 2009 and was only expected to live a few months. However, he did extremely well on prednisone for far longer than that. At the end of November last year he could still get himself upstairs with no assistance, even though he’d lost a lot of weight and was swollen with fluid by then. He continued to deteriorate slowly but as late as Sunday (13th) night he was moving around, eating and drinking. On Monday morning I found him lying completely flat in his cage unable to move, his swelling was noticeably bigger than the night before and he felt cold to the touch. We took him to the vet who said he had fluid or cancer growth in his lungs that was preventing him from breathing properly and advised us to have him put to sleep straight away to end his suffering.

When the ferrets were young I used to complain about the smell, the biting and the time they took to look after. They are not easy pets. But they found their way into my heart and we had so much fun. We’ve still got Lucy but now that both Same Same and Different are gone, the house feels empty. I’ll miss Same especially because he was very cuddly and used to give Mr W and I little ferret kisses. This behaviour earned him the nicknames ‘Mr Kissy’ and ‘Dr Love’. However, he could be relied upon to bite absolutely everyone else, commonly hard enough to draw blood and leave a scar.

This is Same last October. He used to go upstairs to sleep in a spare duvet I’d left on the carpet with the intention of donating it to my parents. 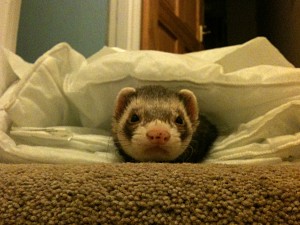 These two definitely know each other:

Not using the flash results in an inferior image but the result is much closer to what the scene actually looks like: 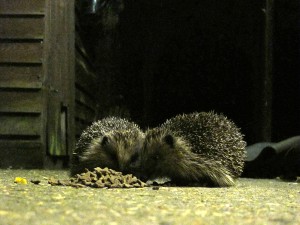 The ultimate evidence that two separate hedgehogs come to feed: 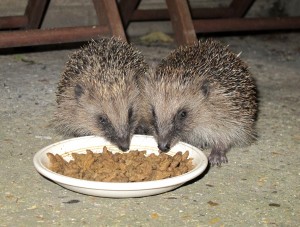 Sharing a meal with a friend is one of life’s greatest pleasures: 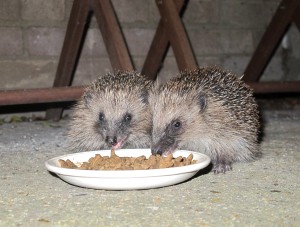